People of Note is one of Bristol’s longest standing community choirs. The choir was set up in 1992 by Nickomo Clarke and Nick Petts, and run by Nickomo and his wife Rasullah from 2009-2020.

Following the news that Nickomo and Rasullah would be retiring from the choir, a group of People of Note choir members set up a Working Party in order to find a new leader. From September 2021 onwards the Working Party set up a number of workshops with different leaders in order to find the right person to lead the choir.  In late 2021 , the choir asked Rosie Sleightholme to be their new leader, and this was made official after the PONITA AGM in February 2022. 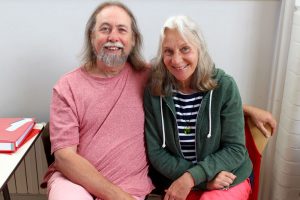 In 2004 members of People of Note created their own organisation within the choir called PONITA, to organise tours and community and charity events. PONITA organised many wonderful trips and events and kept the choir meeting up and performing outside of rehearsals and the annual summer concert. PONITA still exists in a ‘dormant’ state but is no longer involved in the organisation of People of Note.

People of Note International Touring Association (PONITA) is a Registered Charity, number 111389. This means we have to  have a Constitution, that you can read here .  As part of our Constitution, we have a Complaints Policy in case we get something wrong for a member, or member of the public.